From Myth to Tragedy 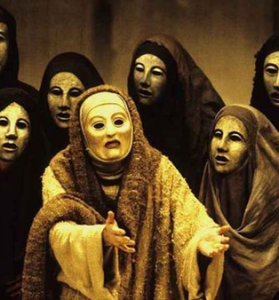 Contact events@ginamay.co.uk for details of a discount for Open University Students

The epics, tragedy and comedy of Ancient Greece are all seeped in myth.  Starting in the oral, Homeric society, tales were told around fires by travelling bards who filled the minds of listeners with gods and goddesses, monsters and mayhem, love and adventure.  By the time of the 5th century BC Homer’s epics were learned by rote in school and every part of Ancient Greek life was involved in some way with religion and reverence of the gods.  And there was drama.   Written by men of great imagination and talent who had no other way to comment on the current affairs of the day other than through their writing.  Aeschylus, Sophocles, Euripides, Aristophanes and others took the affairs of the present, placed them in the mythological past and then put their work on the stage for everyone to see.  The plays may tell of long ago and far away but they still had their feet placed firmly on Athenian soil.

Myth into Tragedy looks at the way in which myth developed into tragedy and comedy as well as how and why the poets used myth as the scaffolding for their plays.  It examines the way in which mortals and gods, women and men, husbands and wives, and daughters and sons are portrayed.  It examines love, hate, murder and lust from the point of view of the poet, the audience and then moving forward, how they have been received in modernity.

Any translation is fine, and to fully appreciate the course, it is advisable to read the plays in advance of each week’s class and have a copy to hand.  If this is not possible, then a good working knowledge of the plot will suffice.

Ahead of the course, participants will receive a printed handbook and seminar schedule as well as a soft copy via email.

Places are limited to ensure that there is room for everyone to be involved in the discussion should they wish.

The course is delivered online in real time through our online classroom. Each class will last for one and a half hours. You will be provided with the necessary software to take part but will need a computer or tablet with a microphone and webcam. This course will require you to have installed the EZTalks Meeting client application found here: https://www.eztalks.com/download

For more information and to book go to: www.ginamay.co.uk/tickets, email events@ginamay.co.uk, or call Gina on 07828199547